I don’t know about you, but I tend to have way too much fun with photo-editing software. 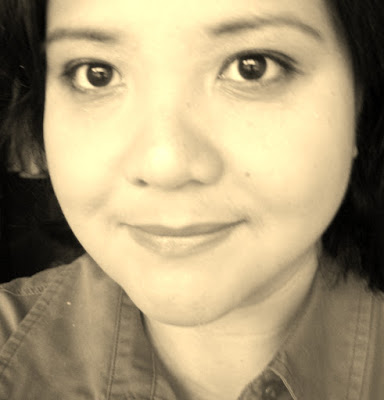 First and foremost, let me state for the record that this photo has not been retouched, as evidenced by, um, certain imperfections that have become more pronounced now than they were in my 20s – the likes of which I plan to take care of as soon as I hustle myself into the nearest salon. (And no, I’m not talking about my eyebags. Unfortunately.)
The other thing about this photo is that I decided to go with sepia because the original colored version is… not exactly what I want to post on a blog, either. I’ll be honest here: BB Cream, no matter how close it is to my skin tone, does not photograph well. At all. Never mind that it does “oxidize” after hours of wear (partly because it slips a little once sweat enters the picture) but the BB Cream I use has a high percentage of titanium dioxide, which is likely to give a bronze-colored gal like me that creepy concrete-face look when photographed. Even when I switch from color to black-and-white, I still look like I have a floating head.
But enough of that. Let’s go straight to the makeup, shall we? 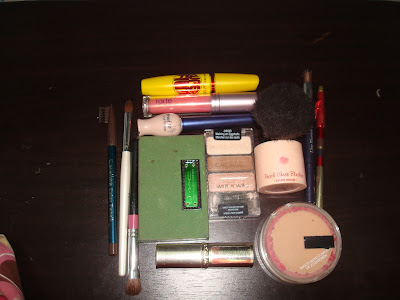 – Base: I didn’t include the BB Cream here because 1) it’s a dermatologist brand and 2) I don’t use it every day, even though I totally should since it counts as sunscreen. Instead, I go with my trusty L’Oreal Infallible Pressed Powder in Sun Beige, which has never failed me – literally – in terms of coverage and wear time. This is especially important, since most Filipinas (especially college students and other residents of Quezon City) use pressed powders instead of liquid foundation for a quick coverage fix, especially on the moments when one has to put on makeup while commuting on the jeepney.
– Eyeshadows: You may recognize the green MAC compact as the Warm 4 palette from the Nordstrom-exclusive Colorforms collection; it’s still my favorite palette, because MAC will always be awesome. The only thing I don’t like about this, however, is the plum color that comes with it, which is almost cranberry-ish and makes me look sickly. Solution: Use the plum to perk up my usual everyday eyeshadow, Wet’n’Wild’s ColorIcon Eyeshadow Trio in Walking on Eggshells. Yes, it’s a little impractical when I have to do my makeup in the library, but it looks gorgeous when I put it into the outer corner and blend it into the crease. In both cases, I use the dome brush that I bought at the dollar store (still hasn’t failed me after more than 10 years) to put on the color and go into the crease, and the ELF blending eye brush for, well, blending.
– Primer: One of the things that I like about both the MAC and Wet’n’Wild shadows is the high amount of pigmentation; they’re vivid on the first application and last well throughout the day. But even the best eyeshadows need a good primer to set them in place… which is why I use Etude House’s Proof 10 Eye Primer. I am not kidding when I say that this is one of the best eyeshadow primers that I have ever tried in a long time. This stuff is up there with all the major primers from the Western brands – yep, including the MAC Paint Pot – in terms of locking eyeshadow in place while still keeping everything blendable and vibrant at the same time. How serious am I about this primer? Let’s just say that I left the house at high noon, on a sweltering-hot summer day, and my eye makeup was still in place by sunset. Hells bells, yes.
– Eyeliner: This is a toss-up for me. I’m loyal to Ever Bilena’s black eyeliner pencil because it’s also a no-joke formula made specifically for crazy Philippine weather… but on the days when I need something softer, I go with the pencil end of Line Nuance Duo #4 from Etude House, which is more of an olive green. Smudging it with the shadow end helps, too.
– Eyebrows: Now, this is where I’ve started to pay more attention lately, since my eyebrows seem to be getting sparse. I don’t like the heavy, penciled-in look that I’ve seen everywhere, though, so I went with this dark brown pencil from Careline instead. The pencil itself is too smudgy for me – which can lead to more errors – so I use it to fill in gaps on my brows and blend it in with the brush on the cap. Need proof? Just look at the picture above and see how the brows frame the face while still looking natural.
– Mascara: I love every single formula of mascara that Maybelline has ever produced for the Southeast Asian market. This month, I’m totally into The Magnum Volum’ Express SuperFilm mascara, which combines a curved brush with fat bristles for optimum eye-opening action. The formula is lightweight yet smudge-proof, and it also lasts all day.
– Blush: Talk about a no-brainer routine. One: Unscrew the cap from Etude House’s Peach Cheek Blusher in Happy Peach #5. Two: Stamp a circle of blush on the high planes of each cheek with the built-in sponge. Three: Use the kabuki brush (which I sometimes use with the face powder) to blend it in. Result: a natural flush without streaky stripes or excessive glimmer a la Kim Kardashian.
– Lippy-stuff: The lipstick is L’Oreal Colour Riche in Tea Rose (another Southeast Asia exclusive), which is a little too orangey for me but works as a pick-me-up on the days when I have no time to do the full routine. On the days when I don’t feel like wearing lipstick, I go with either the Tarte Vitamin-Infused Lipgloss in 40 Winks (from Domesticity’s Glosswatch 2011) or Nivea Fruity Shine in Pomegranate, which is a gorgeously sheer deep red. One of these days, though, I’m going to break down and buy another lipstick (or tinted lip balm) just for giggles… but that would have to wait. 😉