Those of you who have read my interview on Jho Litonjua’s blog may remember that I have mentioned writing with outlines. This is a departure from the way that I used to write, and it sounds like a betrayal whenever I mention what a big difference outlining has made in my writing.

You see, Save the Cake and Crushingly Close were both written without outlines, and no matter how much I tried to fit them into a neat semblance of a structure, I found that I just let the story go wherever it took me. And this system worked pretty well, for the most part, until I faced the editing stage for Crushingly Close and found myself unable to diagnose the problem areas that I needed to fix on top of the comments that I had already received from my beta readers. I wasn’t satisfied with the story as a whole, so I ended up taking apart whole chunks of chapters and patching them together as best as I could. It wasn’t until I managed to hand it over to my editor that I was able to fix the story.

The third manuscript–the one I finished two weeks ago–had an outline of sorts, but somewhere along the way (partly because of the academic and emotional stress that I was going through when I was first writing it) I lost my vision, and when it was time for me to complete it I didn’t know where to pick up the pieces. So I turned to one of my writing manuals–Nail Your Novel by Roz Morris–and decided to pick apart the story down to the bare bones. From this book I picked up the suggestion of making a “structural survey” of scenes, character notes, and plot points which I have included in the story. Because I don’t have enough space to lay down these details on index cards and Post-Its, however, I laid them out on an Excel spreadsheet, which gave me an idea of what went where and why. When I found that the spreadsheet system worked for me, it was easy for me to finish the draft.

Which made me think: look, I’m obviously going to be writing my fourth book in November, and I’m probably going to be an emotional mess depending on what happens to my comprehensive exams. Might as well have an outline ready, right?

I started out with the Contemporary Romance Novel Outline file that I tried (and failed) to use for Save the Cake, and this is what it looked like: 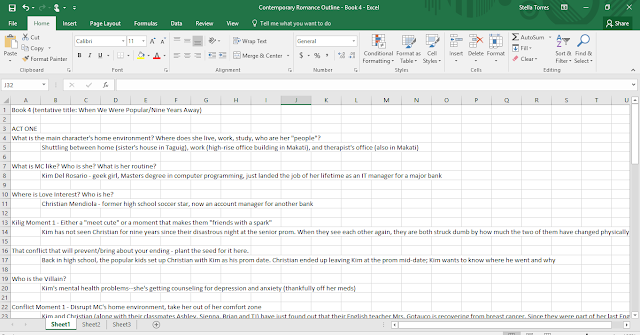 As you can see, this outline lays down the first part of a three-act structure, with questions about who the main characters are and where I place the kilig and conflict moments. But after my experience with the revisions for Crushingly Close, I realized that sticking to just three moments of romantic giddiness made my stories formulaic and stiff. I also realized that outlining my stories this way didn’t leave enough room for me to write down the important subplots that I needed to write in. For this example, most of the focus was on the main character, Kim, and her relationship with her love interest Christian. But it doesn’t adequately answer the question of how things got to be so tense between Kim and Christian. Yes, they knew each other in high school, and they’re getting together for a reunion, but why are they getting together now, and who else is going to be involved? Not to mention that I’m the kind of writer who likes to introduce the other players off the bat before laying down their motivations further down the line. As it is, this was a nice starting point for who and where I want this story to go–but it’s limiting, and it doesn’t show me the big picture.

Enter Sheet 2 in the same document.

This is the spreadsheet version of Roz Morris’ “cards game,” where I jot down the tiny elements that I want in my story and arrange it into chapters. Don’t let the spreadsheet format scare you; I find that writing down the details that I want into single cells helps me build the story scene by scene, chapter by chapter, until I have a skeleton of a story that I can consult once I start writing the manuscript in earnest come November. And I don’t hold back on what I plug into that outline–there are plot twists, specific settings, and even bits and pieces of dialogue (not shown in this picture). The breakdown is scene-by-scene and chapter-by-chapter, but sometimes I find that there are times where I would have an insight and plug it into a cell that I can move around the spreadsheet. Then there are those scenes (especially the sexy and/or romantic ones, which usually spiral out of control anyway) which deserve their own chapters, so I cut and paste the rows. This is not to say that I’m going to write everything in order, but the outline gives me a picture of what it takes to go from beginning to end–and since I tend to write with the end in mind, I can use this outline to deal with chapters as I see fit, as opposed to waiting for the muse to strike whenever I try to write chronologically. Not to mention that this would come in handy when I finally set up the Scrivener file for the book so that I can organize the chapters into file folders right away.

The only other thing I can say about this outline is that it only gives a glimpse of characterization, which is a big challenge for me (more on that later). What it does map out, however, is character motivation, which helps the plot along by pitting characters against one another in every scene. Without establishing motivation, I’d be left with a plot that doesn’t move smoothly or naturally, which would then affect everything else in the story–including pacing and dialogue.

So in conclusion, outlining is my way of saving myself precious time and effort in writing my books. I’m not saying it’s for everyone–if you’ve succeeded in writing without an outline, that’s great!–but if you’re like me and you’ve found that pantsing gets you nowhere, why not try it out for yourself? At the very least, it can help you map things out for certain, and you can make it to “happily ever after” without the angst. And really, who doesn’t want that?