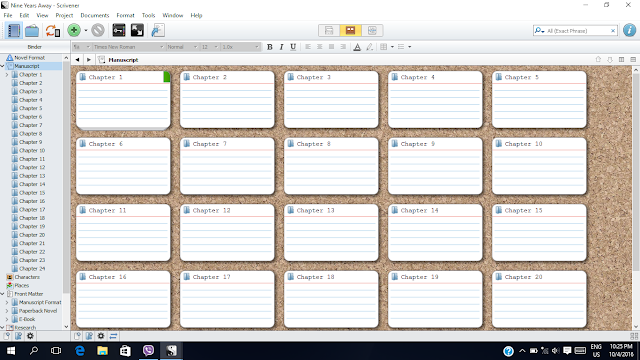 (Screengrab: my original Scrivener file for Nine Years Away. Click to enlarge!)
And we’re off!

It’s been only five days, but I’ve been seeing some progress. Right now my word count is at 14,977 words, with an average of 2.496 words daily according to the NaNoWriMo site–a little over the 2,000 words per day that I’ve allotted for myself this month. However, I’ve been logging my numbers on a separate spreadsheet, and there have been several days when I’ve written past 3.000 words! Here are my comments:

– Another factor that can be examined is my caffeine intake. On November 4, I had a cup of my favorite 3-in-1 milk tea (Owl Teh Tarik) in the afternoon, and that day I ended up writing 3,849 words in five hours for a high of 770 words/hour. That day remains my highest on record, but when I decided to go caffeine free the next day (see above), my numbers were still in the 3,000/day range. Perhaps I still had residual effects from the chemical high? I don’t know, but knowing this has taught me that I don’t need to have caffeine every day to write more, even if I did write faster.

– What I can say was an influential factor was writing my scenes out of order. You see, that’s the great thing about outlines: when you have a scene that you have to, have to write, you write it right away. It’s even more convenient when you have Scrivener and you’ve already divided your chapters by folder, which means you can squeeze in scenes according to where they are in the narrative. In my case, I was itching to write the sex scene, so I got started on it on October 3 and continued to write the chapters surrounding that scene the next day. Once I got those chapters out of the way, I went back to the chapters I was working on in chronological order (Chapters 3 and 4) and used the information that I had just written to inform the characters’ decisions on those chapters–a sort of foreshadowing, if you will. That also helped me to recalibrate the romance between my MC and LI in terms of their chemistry (Jenna Moreci has more to say on the subject here) by giving them more opportunities to pursue each other, even though they didn’t start off strong in the previous chapters.

– What also helped: a “show, don’t tell” approach to storytelling. Originally I had intended to write this in Deep POV, but I found that it killed the sense of romance and made my MC sound a little crazy. (Really now: Just because she’s managing her depression doesn’t mean that she has to plunge into the dark side.) But after hearing the live reading that Rachel and Herv did for Save the Cake, I realized that I had to lay off on the dialogue tags. So now most of the novel is written like this:

“You know what we could do?” It was Sienna’s turn to face everyone else. “We could visit her. There’s a three-day weekend coming up in a couple of weeks.”

“That’s a great idea.” Ashley’s voice cut through the noise in the restaurant. “Kim, are you cool if I take you there?”

“No complaints from me.”

Christian turned to the rest of the table. “I’ll see if Egg wants to go. He’d want to see Mrs. G too.”

“You do that.” Sienna’s voice turned terse at the sound of Egg’s name. “Anyway. How big is this resort, Brian?”

So, to recap: More action, more description, less dialogue tags. Yes, it’s painful, but I still needed to remind myself that my goal was to come up with a rough draft, so I put aside my reservations

– And here comes the part where I know you’re going to kill me: I did not stick to my outline! There were entire scenes where I actually pantsed it because I thought that the previous scenes were weaker, and I wanted to get into my MC’s mind a little deeper. The last two scenes that I wrote last night were pantsed because I needed Kim and Christian to spend more time with each other. But I don’t regret it; if anything, I felt that my outline was just a way to keep my pantsing under control. This might probably change once I start editing this story, but for now this combination is working for me.

– The urge to edit as I write has been strong for this story, since I can’t seem to get the characterizations in order and there are some places where the prose sounded downright painful. But again, I have to remind myself that my goal is to have a finished rough draft by November 30, if not earlier. To quote Elizabeth Gilbert, the point of the exercise is to remember that “done is better than good”–because not everyone gets to finish what they’ve started, and this story would probably remain untold if it wasn’t finished.

Next week’s goals: breaking 20k, updating my word count for 10 days in a row, and building up more chemistry between the characters to put the romance front and center. Fingers crossed!