Last week I mentioned that I kept a story bible for Nine Years Away, which was basically a journal of anything and everything related to the manuscript. It was less organized than a bullet journal, but more structured than a plain ol’ brain dump. It was my way of making sense of all the stuff that had gone out of control before I took a break from the story, so I could bring it back to the romance (with suspense elements) that I had meant for it to be before it went out of control.

At this point I’d reduced my characters of interest to three–main character, love interest, and antagonist–which meant I had to address the initial beta readers’ comments that they didn’t get to know these characters well enough to care about them. So I went to my notebook and wrote down the same question for the three characters:

Why are you so messed up?

(The language I used in my story journal is a little more uncouth than this, but you get the idea.)

Asking that question meant that I had to go through all the psychological conflict that had been brewing inside these characters before and within the timeline of the story. In this case, these three characters have butted heads in high school (hence, “nine years away” from their teenage years) so their pathologies run deep into their adolescence–or, in the case of the antagonist, all the way to childhood. Because the question was so blunt, the “confessions” of these characters flowed like juice, and I was able to trace a web of events that have made them the characters they were at the beginning of the story, which I would then tie up to the loose ends that I had already written for them in the last draft.

That didn’t mean the work ended there, however.

One of the lessons I learned from revising my #romanceclass2017 story was that I needed to pay attention to the conflicts that these characters faced within the story, so I had to look at it in terms of internal and external goals. In order to sort out my thoughts, I drew up a chart of what the goals were for each character. The original chart looked like this: 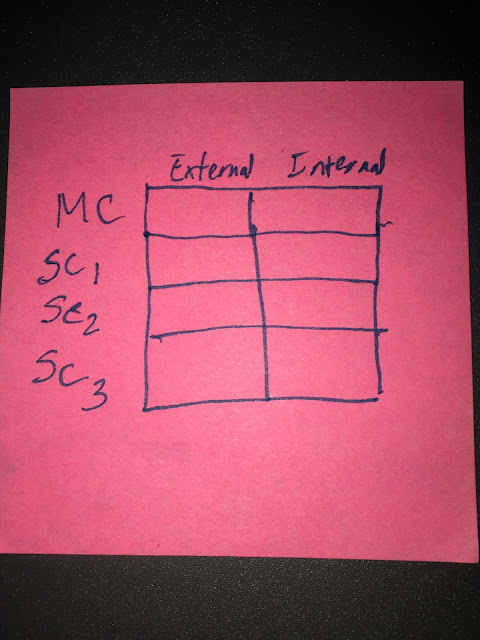 As you can see, the rows represent each character, and the columns represent the type of goal (external vs. internal). I initially did this system for all of the characters in the story, but I found that this one worked best with the supporting characters, including the antagonist. Since I was writing a romance, I had to remember that the relationship is the main story, and any subplot must serve that relationship in order to be effective.

So, taking into account what I’d learned about romance writing this past year (see also: my post about the “true north” of romance, and the Twitter thread by Mia Hopkins that inspired it ) I drew up a different matrix for the main character and love interest. 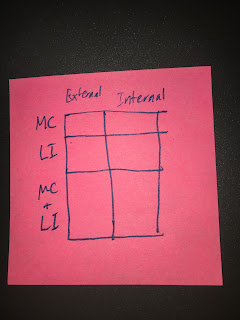 Individually, the MC and the LI have their own individual set of external goals–in this case, our MC wants revenge while our LI only wants to profess his longtime crush on her–but based on the “why are you so f’d up” exercise, their internal goals are a product of their deeply internalized angst. What the MC calls “revenge,” for example, is actually an urge to find closure on the darkest point of her life, so she could move forward. And the LI’s goal of “getting the girl” is more like a means to resolve his own deep-seated issues with love and intimacy, since his effed-up-ness stems from the repression of his real feelings.

But take a look at the last row on this chart, however. See how I’ve devoted it to both the MC and the LI? This is where I started mapping out their relationship goals. Together, they have certain goals that coincide with each other, both external and internal. Again, this goes back to the backstory and the question of What Messed You Up; what looks like a common goal that they’re working on (e.g. exposing the truth about high school) is actually tied to another goal that’s so deeply internalized that only the author and the readers could see it–in this case, it’s to heal their relationship and accept each other for who they are, as they are now. And since the MC+LI are analyzed as a single unit, this builds the foundation for a relationship story around which all other developments must revolve from beginning to end. Think of the relationship as the soft-serve ice cream in a deluxe sundae, with the characters as the hot fudge and the subplots as various toppings (nuts, cookies, marshmallows, whatever makes you happy): you can do whatever you want, but if you can’t swirl them all into the same spoon then you’re missing the point.

Once I worked this out, I went back to the manuscript and pitted the goals for each character against each other. This helped me rewrite scenes to concentrate on the intimacy of the MC and LI (including a hot flirting scene that replaced a long, drawn-out excuse for exposition) as well as deepening the inner life of the antagonist without taking away her edge. The result for this draft was closer to romantic suspense than the psychological thriller/women’s fiction hybrid that I had been trying to re-outline at that point.

The thing about working on characterization, however, was that it also affected the story’s plot in certain ways. I’ll talk about this more next week in Part 3 of this series.