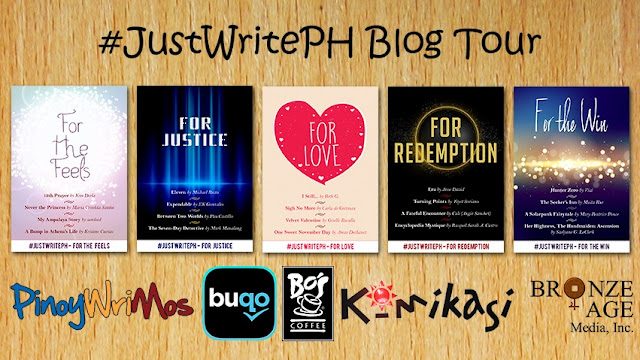 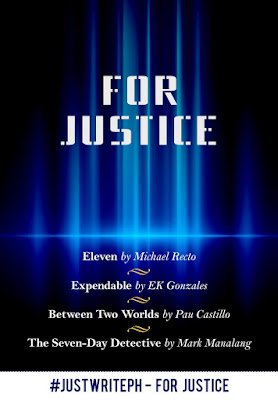 #JustWritePH—For Justice
Authors: Michael Recto, EK Gonzales, Pau Castillo, and Mark Manalang
Buy it from Buqo for US$0.99 (P45) from September 14 to 20. Regular price is US$3.99 (P180)
When justice calls, heroes rise. Follow the journeys of a fire programmer, two very unique detectives, and an unlikely partnership between a mortal and a ghost as they fight for what they believe in and even their very survival in this action-packed bundle of four stories from up-and-coming writers. Features “Eleven” by Michael Recto, “Expendable” by EK Gonzales, “Between Two Worlds” by Pau Castillo, and “The Seven-Day Detective” by Mark Manalang.
Our featured writer for the week is Michael Recto, author of the murder mystery Eleven.

Detective Randall Dela Rosa is hot on the trails of a string of unexplained murders halfway around the world. There have been 7 victims so far, all of them murdered in creatively horrible methods, had the number 11 carved on their corpses, and were made to recite a cryptic in Filipino before their murders: “Mayroong isangdaan at dalawampu’t isang dahilan kung bakit hindi para sa iyo ang kuwentong ito ngunit…” (There are one hundred and twenty one reasons why this story isn’t for you but…) The latest victim, number 8, has lead him back to his father’s home country, the Philippines. As an Interpol agent, he expected that his presence will not be welcomed. The local police deemed his “meddling” as unnecessary and a blow to the local force’s pride. However, Detective Dela Rosa is ready to place everything on the line to stop the murders and finally stop the nightmares haunting him.

I stood stunned and breathless while I read this. It was written in blood on a concrete wall just above a bludgeoned corpse. He was victim number 10. His arms were bloody stumps with strings of cartilage hanging loosely where the hands were supposed to be. The killer must have forced the victim to write the phrase on the wall with his bloody arms.
The 9 victims before this were all made to say this phrase and then murdered in horrible ways before they finished. I followed this case halfway around the world. It has become my life for the past 8 months. I never imagined that this case would bring me back to my father’s hometown.
Number 1 was impaled with an ornate knife to his nape. The knife was part of the victim’s antique collection, and other than the knife itself, none of the other expensive antiquities were touched. The body was found inside a museum which the victim frequently finances as a donor.
Number 2 was pale white, had blue lips and was retrieved a washed by the River Nile. His limbs were bound by ropes one inch in diameter. When the corpse was autopsied, they found a set of keys in the victim’s stomach. We found out that victim number 2 has a collection of yachts; the keys he ingested matched all of those that he owned. He must have been forced by the killer to swallow all the keys, and then one of his yachts was used to carry him and throw him overboard to his death.
Number 3 was immolated from the torso down with a “do it yourself” fire thrower, made using a sophisticated lighter and an insect spray. Number 3’s video was different in quality compared to the first two. Eventually, we found out that the deed was done in a TV studio, particularly one that is used for instructional shows and infomercials. The victim was the producer of the said show and even hosted a couple of episodes himself. The murder weapon was made by the victim himself, probably coerced by the murderer to make one.
Number 4 had his body sliced open with a gaping laceration from his left shoulder down to his lower right rib cage. The weapon used was a rusted katana, a replica even. It was sharp enough to cut like butter through the lungs but struggled cutting through the bones. It was retrieved wedged between a mixture of his flesh and bone. Number 4 was some sort of super fan. The rusted sword was supposed to be a replica of an iconic sword in a very famous TV show that is set in Japan’s Sengoku era. In fact, victim Number 4 was killed in the same fashion as one of the show’s important supporting characters. Eventually, we learned that the victim was one of the show’s major financial backers. If it weren’t for his money, the show would have been cancelled prematurely and not given another chance for a 2nd season.
Number 5 had several arrows that punctured through the gaps of his ribs, all of the arrowheads protruded through the back. She was found in an orchard, dangling down from an apple with a rope tied around her arms and her feet bound in duct tape. It’s obvious to infer that she was made a human target. She owned the orchard she was killed in.

Name: Michael Recto
Occupation: Master of the spreadsheets by day, slave of the stories by night.
Writing experience: Wrote poetry and children stories during my college days. Finally had my first published story after the #JustWrite workshop.
Favorite time of day to write: As soon as I wake up. I learned that by doing this, I get to write anything on the first deluge of creativity brought about by a freshly rested mind. I also manage to get things done before the usual daily distractions start overwhelming me.
Favorite writing instrument: Good old pen and paper when planning and then I use a PC or typewriter when it’s time to squeeze out the story.
Favorite snack (and/or drink) while writing: Coffee is enough.

How my story began: My story was intended as an entry for an “Opening Line Contest” in Wattpad. The ambassadors assigned a phrase that we are supposed to use as the opening line. I noticed though that almost all of the posted works used the required opening line but “discarded” it afterwards to continue telling their story. I, however, wanted my entry to stand out so I decided to use the phrase as a plot element and not just simply use it as the opening line.

Upon brainstorming, the first image that came into my head was a concrete wall with the said phrase scrawled on it in blood. I then took the story from there. “Eleven” was an exhilarating revelation eventually.

I never knew that I was up to writing such a gritty crime thriller and it was my first attempt at such. Sadly, real life took over again and I was not able to finish the story on time for the Wattpad contest. The contest also required that the story must be within 2,500 words which was too just too cramped for the plot I intended. I was already in the middle of the #JustWrite workshop back then and after getting great feedback from my fellow writers when I pitched the idea, I decided to finish the story.

My greatest challenge: (Writing) was like landing in Normandy without checking if I had enough bullets :D. The story sounded great but underdeveloped. Thankfully, positive stress worked its magic. The action scene at the latter part of the story was born out of pure inspiration and imagination.

The beta-reading and editing process: I gave my manuscript to a co-worker and she acted as my beta-reader. Her feedback was vital in making sure that my story hooked anyone who reads through the first few paragraphs which what I really aimed for. Due to the time constraints though, I had to do all the line editing myself and I went through the story over and over again to make sure that I wrote the plot as logical as I can.

What I’ve learned from this class: Definitely some more research and planning. Particularly in the time management part. Liana (Smith-Bautista)mentioned that as writers, we should be adept at using our “busy idle time”. Writing doesn’t stop when you leave the PC or set down the pen. A writer takes the story everywhere he goes. He nurtures it, he plays with it, he coddles it, and whips it to shape. So that by the time he takes hold of the pen again or finds himself in front of the keyboard, the words won’t be as lost and confused.

What’s next for me: Although I intend to revisit “Eleven” to give it the “Justice” it deserves, I was unsure whether to dabble into writing a crime story again. I was already planning another story (a RomCom in fact :D) and setting my sights on NaNoWrimo.

I was scouring the internet for any other workshop I can join when I came across #HeistClub in Facebook. It’s a crime novel writing workshop sponsored by Bronze Age Media.

So, there I go again. I’ll be working on another crime novel but this time, I’ll be ready. The bumpy ride that I took in #JustWrite, I’ll be taking even further in #HeistClub, with seatbelts, aviator glasses, and a finger on the nitro button this time. I’m happy if I can just be in an opportunity where I can tell a story and people will listen.

Time for another giveaway! Just check out the Rafflecopter link below for a chance to win one of three (3) copies of the #JustWritePH For Justice bundle. Hurry, because this giveaway won’t last for long!