Book Review: What You Wanted by Mina V. Esguerra 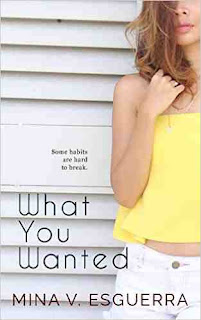 It’s the classic one-night stand: Beach wedding, bridesmaid, groom’s friend. When Andrea and Damon meet, sparks fly, and they give in to the attraction. Sounds simple, but Andrea’s still getting over someone, and Damon thought he’d be hooking up with another person that night. It could still be simple, really, if they chalk it up to a weekend tryst and move on.

But one night becomes lunch the week after, and then dinner the next weekend…and before they know it, Andrea and Damon are still together, dealing with the feelings they know they might still have for other people. How hard can it be to get exactly what you want? How do you even know what it is?

***Andrea and Damon met in prequel short story WEDDING NIGHT STAND, but this book can be read as a standalone.***

****
REVIEW
(Note: I received a copy from the author in exchange for an honest review.)
When I heard that Mina V. Esguerra was going to revisit the Chic Manila universe with the continuation of Andrea and Damon’s story from Wedding Night Stand, I jumped at the chance to read their book and see what happened after their one steamy encounter in Batangas. I knew that (spoiler!) they had plans to get together when they got back to Manila, but a few questions remained: How were they going to manage the aftermath? Would they try to stay friends, or would they have a hard time getting out of each other’s beds? And what if love enters the equation?
Thankfully, What You Wanted gives us the answers to those questions and more. Andrea isn’t exactly in a place where she should be in a relationship; she’s getting over her ex-best friend/almost-boyfriend Thad, who had just gotten married to someone else. And Damon isn’t exactly boyfriend material, either, since Andrea knows that he’s still pining for his dream girl Geraldine. Yet, they enter this agreement with each other–not quite a relationship, but a little bit more than “just friends”–knowing that their presence in each other’s lives is nothing more than a middle finger to the destiny that had denied them the person that they’d wanted in the first place. And yet, in true Mina V. Esguerra fashion, that doesn’t stop them from doing things that couples do: public displays of affection, family get-togethers, even spontaneous road trips. Nothing is easy, nothing is clear, and all the boundaries end up blurring into a giant mess.

“Is that a question?”

He shook his head. He wasn’t angry.

The more Andrea and Damon get to know each other, the more they question the point of their arrangement. And it doesn’t take long before the feelings come into play–not the least which being love.

There’s a lot to recommend about What You Wanted. There’s a lot of room to get to know Andrea and Damon as characters; they’re not exactly likable (as evidenced by their actions) but they have great chemistry and their journey to redemption is rendered with wicked wit, especially when it comes to the mini-conflicts that threaten to tear them apart. It’s not too hard to imagine people in real life who would end up in the conundrum that these two face, but it’s hard to look away as you watch everything go to hell in a handbasket.

There were scenes that made me laugh out loud, like the moment when Andrea enters an archery range and tries her hand at shooting arrows. There’s a little bit of steam, too, but there are also moments that would leave you swooning. The spontaneous road trip that the two make toward the middle of the story is an example of that; they’re still not a couple, but the intimacy is so prevalent that you have to wonder if they’ll ever wake up to the truth about their relationship-of-sorts.

Along the way, we’re also treated to guest appearances from other characters in the Chic Manila universe: Damon lives in the apartment complex from Welcome to Envy Park, and Andrea’s sister Julie (from That Kind of Guy) is happily married to Anton. If there’s any complaint that I would have about the book, it would be the fact that the villains are demonized too early in the story; it would have been more enjoyable if their dastardliness had been revealed more slowly, so there wouldn’t be a big honking sign over their heads saying “Bad Person(s) Ahead!”

All in all, What You Wanted is an enjoyable read, and I would recommend it to anyone who likes their romances with a wicked twist of humor. It will be interesting to see what Mina comes up with next, especially if she decides to re-visit this universe again.