BOOK REVIEW: If The Dress Fits, by Carla De Guzman 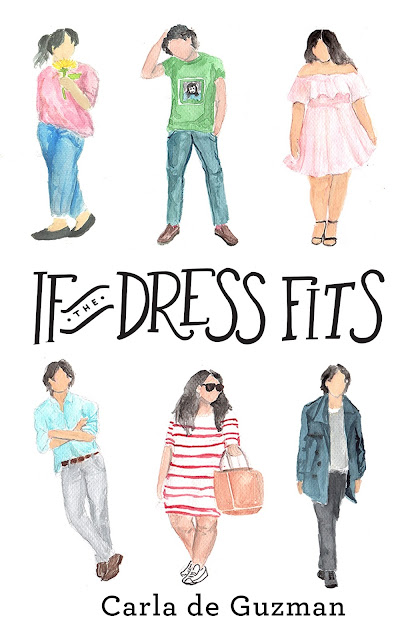 Martha Aguas kind of has it all–she’s an accountant who loves numbers, an accident-prone puppy that loves her, and the perfect wardrobe.

Yes, she wears a dress size 24, her bras don’t fit and she’s never had a boyfriend, but so what?

It becomes a big deal when her perfect cousin Regina announces her engagement to Enzo, the only boy she’s ever loved (he doesn’t know, so don’t tell him!) Suddenly Aguases from all corners of the globe are coming for the event, and the last thing Martha wants is to be asked why she still prefers her lattes with a waffle on the side.

Thank god for Max. Goofy, funny, dependable Max, who finds himself playing the fake boyfriend at the family festivities. But why does it feel like only one of them is pretending?

Link: Amazon | Smashwords (releases October 15)
Print edition releases on October 22. Pre-order your copy here to pick it up at #FeelsFest in Glorietta 5 on release day!

REVIEW
(I have voluntarily received an advance copy from the author for this review.)
The first word that comes to mind whenever I think of Carla De Guzman’s writing is “delightful”–every moment is filled with humor, heart, and all sorts of swoon-worthy goodness that it’s hard not to read her prose without a smile on your face. Before this book, I had only read her novella Marry Me, Charlotte B!, which took a complicated set-up (a wedding-planning business being filmed by a reality-television crew) and turned it into a romantic comedy with unforgettable characters and the best of San Francisco as a backdrop. With If The Dress Fits, however, the author brings us closer to home with a plus-sized heroine who can keep it together–or so she thinks–in a world that doesn’t reward the “healthy”ones with the love and respect that they deserve.
It’s not that Martha is unhappy with her weight; unlike many “big and beautiful” heroines, she doesn’t see her size as a hindrance to her success. Sure, she might have a complicated relationship with food, but for the most part she has never viewed her weight as a problem that must be solved. Besides, she had already lost her virginity in college to the handsome Enzo, never mind that they were both drunk at the time and she just wanted everything to be “over with” in no time. But she knew that Enzo was going to break her heart, so she left him the next morning and proceeded to carry a torch for him for the rest of her life. Imagine her shock, then, when she sees him at a meeting in her office–a pleasant surprise that she thinks has re-ignited the chemistry between them…until he proposes in public to her cousin, the beautiful and perfect-in-every-way Regina.
Meanwhile, Martha also enjoys the company of Max, a veterinarian and serial dater who indulges in books. His friendship with Martha is one of the few constants in his life, and when Martha’s nosy relatives start to see them together all the time, it’s not hard for Martha to misdirect them by blurting out that Max is her boyfriend–and Max, ever loyal to Martha, is more than glad to play the charade with her. But the chemistry between Martha and Max is so palpable–even more so than her chemistry with Enzo–that when Max and Martha become lovers (in a romantic sex scene that’s equal parts sweet and hot), you find yourself rooting for them as the endgame. And yet, Martha has to realize first what it means to fall in love:

I didn’t recognize it at first, because I’d known love to be this slow, agonizing thing that was never returned. But this? This kind of love filled my heart with so much happiness that I wanted to laugh.

More than the attentions of the two men in her life, Martha has to contend with her own issues with her career, and especially the scrutiny of her family. After all, she works for her father’s accounting firm, and she has a gaggle of aunts (check out their fairy-tale names!) who can’t for the life of them understand how someone her size can be confident in her own happiness–unlike Regina, who is pretty and perfect in every way possible. But no matter how happy she claims to be, there’s still a nagging sense of insecurity that she couldn’t name for sure:

I know I’m supposed to “love my size,” and I did. But forgive me for not being totally happy with it 24/7. I felt like I was still waiting for my life to begin, but my weight had nothing to do with that.

There are so many twists and turns throughout the story that will keep you reading until the end. I loved Martha’s complicated relationship with her family, and the wise decision to not demonize Regina as a harpy in a pretty package. I also loved the fact that the conflicts were not set up for the sake of conflict, since they emerged and were resolved organically. What I appreciated the most about the story, however, was the portrayal of Martha’s relationship with food as something that brought her pleasure. Food, in this book, is not presented as the enemy, but the way Martha eats is a metaphor for her refusal to let down her guard and show her true feelings. It’s a good thing that Martha’s problems weren’t easily solved by diet and exercise alone, but the psychological ramifications of her eating habits seem to do more damage to her than what she actually eats.
(And speaking of eating, there’s a scene involving Martha’s dog Bibi that would leave you hyperventilating. Suffice it to say that Bibi has eaten something that would lead to a life-and-death situation had Martha not had the wits to detect the problem in a timely manner.)
If The Dress Fits is a warm, satisfying story about one woman’s realization of what it means to be worthy of love and respect. You’ll find yourself cheering for Martha as she finds herself–and her happily-ever-after–in the most wondrous of ways. Go read it now!
RATING: B+