Blog Tour Guest Post + Giveaway: IN OVER HER HEAD, by Anne Plaza

We are pleased to welcome another visit from Book Junkie Blog Tours! Today we feature the wonderful Anne Plaza and her #romanceclass novella, In Over Her Head.

Anne has one of been one of my writing buddies throughout #romanceclass and several years of NaNoWriMo, so it’s an honor for me to feature her on my blog. Here’s a little bit of info about her book… 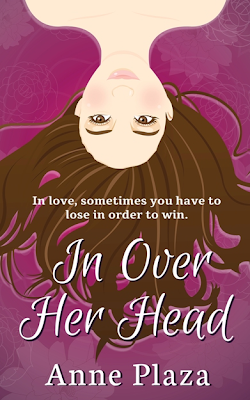 IN OVER HER HEAD
by Anne Plaza
Links: Amazon | Smashwords | Goodreads | Paperback (pre-orders)
About the Book:

All she wants is to get even…

Erika Apostol’s quiet and unassuming life gets disrupted when she learns that Richard Javier, the very same person who broke her heart many years ago, is now back in the country. Her world is turned upside down as old feelings she thought were buried resurface to haunt her once more.

Determined to give Richard a dose of his own medicine, Erika finds herself involved in an outrageous plan devised by her friends. They enlist the help of Jerome Gonzales, an attractive and charismatic DJ (with a playboy reputation), to pose as her significant other.

As the plan goes in full swing, Erika discovers Richard’s jealous side, and that there’s something more to Jerome than meets the eye. Will this grand charade work out the way it should, or will she be left with nothing in the end?

One of the things that caught my interest about In Over Her Head was the fact that she wrote most of the story in present tense, which can be challenging especially for those of us who have been taught to write fiction in past tense. Here she writes about the pros and cons about writing in the “now.”
—-

It’s actually very tricky to write a fiction narrative the present tense. Here are some of the reasons:

1. When a writer decides to use the present tense narrative in their novels, there’s a huge investment on detail in the story—details that could include content that may bore the reader in one way or the other.

2. There’s a danger of the reader getting stressed or bored (see #1), unless the story is a suspense/thriller. It wouldn’t work as well for a story with many points of view; the sense of immediacy makes it difficult to write when the perspective changes.

3. Events happening prior to a current situation in the story would be challenging to describe in a present tense story. Although this is possible to do, the writer has to tie things together seamlessly without confusing the reader as to when the event/s took place.

4. The writer is challenged to determine relevant thoughts without creating gaps in the character’s consciousness. Readers shouldn’t miss important events when the writer “leaves the character’s mind” to talk about the “real world” because they can’t describe what happened in between.

But on the upside, here are some great reasons to consider writing in the present tense:

1. Writers using this verb tense would typically use the first person POV, which is a natural way to narrate. Also, present tense first person POVs bring out the voice of the character into sharp focus.

2. It’s a lot easier to imagine the events unfold in the story. Readers feel a lot more involved, and it’s a lot easier for them to invest their emotions on the character and their situations.

I chose to write In Over Her Head in the present tense as I wanted to depict the main character’s thoughts in the “now”. I wanted to write the story in a casual, active tone that’s sort of like talking to a friend about life experiences. I wanted readers to have the impression that the main character is talking to them in a personal way. As a reader, I like stories written in the present because I feel more involved in the story. It’s like watching the scenes unfold and experiencing events the same way the character does.

Needless to say, I also encountered the writing challenges I mentioned in the beginning, especially in terms of grammar. I had several instances in the story where the main character relives something that happened, say, a few days ago, to gain perspective from what’s happening in the present, but that shift made me feel like I needed to say it better. But in the end, I was able to reconcile the challenges in my writing with the help of beta readers and my editor. It really makes a huge difference to have more than one person look into your draft and provide the feedback you need to bring the story to its full potential. 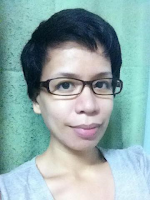 Anne Plaza has a degree in Psychology, but has actively pursued a career in writing in her previous work as a reporter and online editor. She currently works in the field of marketing communications and spends most of her time writing fiction (while not on the lookout for the nearest cupcake and cronut store).  Aside from writing, she loves to read contemporary romance, young adult, fantasy, and historical fiction. She also collects stamps and postcards, and loves everything about cats. Anne is based in Quezon City, Philippines. In Over Her Head is her first published work in English.
More of Anne’s writings and musings can be found on her blog, Brewed Thoughts. You can also check out her author page on Facebook and follow her on Twitter, or email her at anneplaza@gmail.com.
—
Win a fabulous swag bag from Anne and Book Junkie Blog Tours featuring a paperback copy of In Over Her Head, cool stationery, and even a diamond necklace! (Okay, not a real diamond necklace, but it’s still cool.) Simply sign up for the Rafflecopter giveaway below.