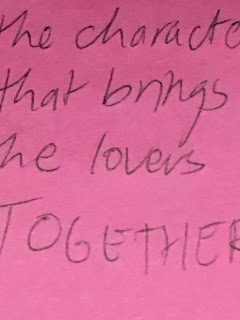 Whew. Time flew by these last two months, didn’t they?

As I mentioned earlier last month, I drafted my last Bimonthly Goals post without knowing that I would get my #romanceclass2017 notes so soon.  When I did get those notes, everything that I’d intended to work on, including outlines and revisions, were left unfinished. It wasn’t an easy journey, since I was battling a lot of self-doubt on top of some health problems, but I finished it, and I’m leaving the rest up to the Universe to sort things out.

Then, on the second half of August, my Dad went to the hospital to undergo some procedures that required him to stay overnight at the hospital. We knew that this was coming, but we didn’t anticipate that it would take a lot out of us; I had nights when I would fall asleep with my phone on my bed, which left me with no time to charge it at home. He’s home now, and he’s taking it easy, so we’re hoping that things are working out for the best.

Now that I’ve gotten the story of my life out of the way, here are some of the goals that I did meet for July and August:

– Manage my time wisely. I wrote in my planner to manage my life day by day: deadlines, doctor’s appointments, shopping trips. And while I’m still not a morning person by any means, I’ve found that I can spare some time in the afternoons to extend my productivity hours in case there’s not enough time for me to work on my manuscript. It’s a little different now–especially since I’m no longer going from meeting to meeting like I did in grad school–but I’ve gotten more efficient now, and my system seems to be working.

– Put up the print edition of Crushingly Close on CreateSpace. Check! I did this on August 28, but the physical proof won’t be here until sometime in October. If my estimates are correct then this book will be released by…December? Anyway, please pray that CS gets the printing right so that I can approve this without any hesitation.

– Read three books. I didn’t read a lot of the books on my TBR for that month, because I ended up buying more new books! I’ve already talked about Romancing the Beat in the last two entries so I won’t talk about it here. The other highlights of my reading month were Mister O by Lauren Blakely and Just the Sexiest Man Alive by Julie James, both of which made me smile and kept me on my toes. (Julie James, in particular, has practically schooled me in the art of banter and chemistry.)

– Post once a week on my blog. Check! I got really lazy during the first and last weeks of July, though, since I used those times to promote the Smashwords Summer/Winter Sale. But other than that, I think I did okay.

– Exercise twice a week. Yeah, this was hard, but then I was talking to my friend Bakeks (from When Baduy Happens) and we decided that we were going to go walking on Tuesday and Thursday afternoons. It was tough keeping those dates when my Dad was in the hospital, but when we got together it was easy.

Five goals out of nine. Not bad.

I’m going to do this round of Bimonthly Goals differently, because there are some goals that I can’t share to protect my privacy. I won’t count those goals for this month, but they are at the front of my mind, and they will have an effect on how I conduct my affairs between September and October. But other than that…here they are!

– Maximize productivity in the daytime. I’ve already built a routine around writing stuff down on my planner, so the next step is to cut down on my nap time so that I can get more done during the day. This could mean doing things from writing to errands to research and even some chat time, but the most important thing is that I’m getting as much stuff done as possible.

– Revise the #NaNoWriMo2016 manuscript. This one’s imperative because I’ve already put this off for months now and I don’t want to keep my critique partners waiting for too long. With all the feedback that I’ve received, I can start the process of making it as brilliant as possible before it goes for professional edits in December.

– Rebuild outline and story bible for Book 6. I’d put off this project for so long that when I came back from revising #romanceclass2017 I found the story a bit lacking. Then a few wild ideas came along, and now I’ve got a new concept and a new vision for the book. So far I’ve already worked on the outline (using all sorts of guides that I’d picked up from different books) and now I have to decide which Scrivener template I should use. That said, I’m not yet sure if I should do this for #NaNoWriMo2017 or put it off for Camp NaNo in April. I will blog about this more in the coming months, so watch this space.

– Map out a new publication calendar. Considering that I have a two-story backlog this year–plus one book on the way, and another one in the outline stage–I have to draw up a calendar based on what I’m going to write and publish next year. Apart from the aforementioned Book 6, I’m not sure if I’ll have any room in my writing schedule to draft a whole new story in 2018 without publishing something first, so I have to give myself some time to do the edits that I have to do for everything.

– Read at least four books. Preferably happy ones. My challenge is two-fold: not only will I going through my #romanceclass backlog on my TBR, but I will also start reading some contemporary YA to prepare for the revisions to my NaNoWriMo manuscript. I’ve already given myself a head start on this by reading Chasing Mr. Prefect by Katt Briones (cute!) so I’m looking forward to reading more unconventional voices in the coming weeks.

– Post one blog entry a week. I’m not even going to try and quantify this. It’s not easy to come up with ideas for this blog, but there are times when I don’t plan what I’m going to write and everything just flows from there. I live for those moments! But there are times when I do plan, too, and I live for those moments as well. Expect a good mix of content in the next two months.

– Exercise twice a week. On it!

– Write in my journal…at least once a week. One of the things I learned during the last two months is that I can be very, very vulnerable during the darkest moments, which means that I end up dumping my emotional stuff on social media. It can be scary, which is why I plan to mitigate the damage by writing down my thoughts in private as a way of processing my feelings. Self-care comes first!

– Start using up my beauty products. It’s too soon yet to do that to my new makeup, but for the ones that have been in my collection without going bad (especially my lip products) it’s important that I start making significant dents on them before I throw them all away. This is one of the many reasons why I’ve been using the same lip gloss in so many of my Instagram makeup selfies!

So there you have it: nine goals total, and if I finish at least six (because I’m aiming for the moon this time) then I won’t be doing too bad myself. If there’s anything I’ve learned from the last two months, however, it’s that anything can happen, so I might as well be vigilant about what I do in the long run. Here’s hoping I can make it this time.